Volatility appears to be on tap as investors anticipate tightening

If the first couple weeks of 2022 are at all indicative of what’s to come this year, investors may want to buckle up; volatility has returned. With investors betting that major central banks around the globe will be in tightening mode soon, if they aren’t already, much of what worked last year – Meme stocks, crypto, large growth stocks generally, and unprofitable companies more specifically – is under fire. In fact, with real yields rising materially since mid-November, the NASDAQ just moved below its 200-day moving average for the first time since April of 2020. Might value now have its day in the sun?

Source: Board of Governors of the Federal Reserve System (US)

Inflation continues to be front-of-mind for investors, with plenty of conflicting data and divergent perspectives to be had. The headline CPI (Consumer Price Index) number for December was 7%, its highest level in four decades, with the energy component experiencing the sharpest increase on a year-over-year basis, advancing by 29% (and U.S. crude oil just hit a 7-year high this week)[1]. Food prices, which also have a material effect on most consumer pocket books, was up 6.3% year-over-year. Further, with the start of earnings season, Goldman Sachs just made headlines by announcing that its compensation expense for 2021 increased by 33%. CEO David Solomon said, “There is real wage inflation everywhere in the economy.”

Yet, the Treasury market isn’t pricing in persistently high inflation; the 5-year breakeven rate stood at 2.8% as of January 18th, down from a recent high of almost 3.2%. 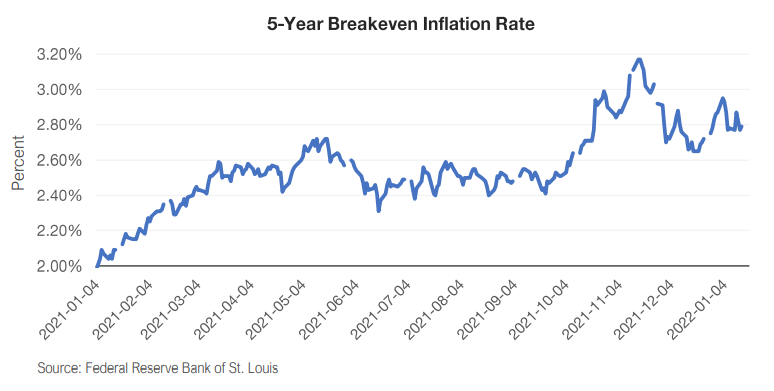 Beyond a possible shift in the growth-value landscape, investors appear to be rethinking their U.S. – foreign stock weightings as well. That may be,in part, due to the notable valuation gap that has developed in recent years. According to WisdomTree’s Jeremy Schwartz, multiple expansion was a much larger component of returns to U.S. stocks over the past decade than for international developed or emerging market equities. Multiple expansion reflects sentiment, and while the revenue increases to U.S. companies was considerably higher than for their overseas peers, contributing to that positive sentiment, the valuation gap has reached a level where most strategists, Frontier included, now see substantially more opportunity abroad from a long-term return perspective. 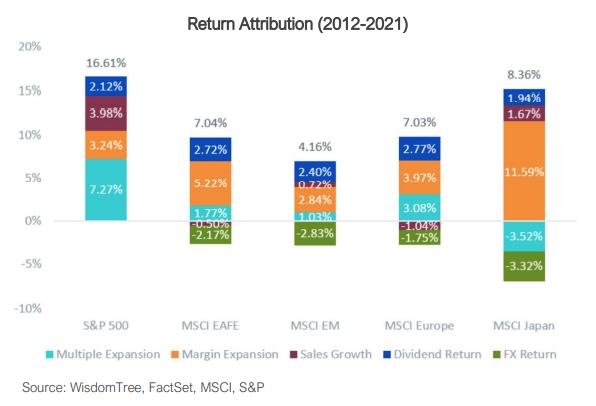 As economist Herbert Stein famously said, “If something cannot go on forever, it will stop.” U.S. large cap growth stocks can’t always come out on top, and through the 18th of January, investors have shown a preference for both value and international, with the combination thereof faring the best. The MSCI EAFE Value Index has gained 4.7%, while the Russell 1000 Growth is off by 7.8%. Emerging market equities have also clawed their way to a small gain thus far, after being in the red last year. And as for bonds, well, it’s been a difficult start to the year, with duration taking a beating; long-term Treasuries are down by 5.9%. High quality bonds in general are off by 2.4%, and even high yield, which is far less interest rate sensitive, is off by 1.2%.

A truly new year may indeed be in store.

Past performance is no guarantee of future returns. Performance discussed represents total returns that include income, realized and unrealized gains and losses, but gross of advisory fees. Nothing presented herein is or is intended to constitute investment advice or recommendations to buy or sell any types of securities and no investment decision should be made based solely on information provided herein. There is a risk of loss from an investment in securities, including the risk of loss of principal. Different types of investments involve varying degrees of risk, and there can be no assurance that any specific investment will be profitable or suitable for an investor’s financial situation or risk tolerance. Diversification and asset allocation do not ensure a profit or protect against a loss. All performance results should be considered in light of the market and economic conditions that prevailed at the time those results were generated. Before investing, consider investment objectives, risks, fees and expenses. Frontier may modify its process, opinions and assumptions at any time without notice as data is analyzed.

Any forward-looking statements or forecasts are based on assumptions and actual results are expected to vary from any such statements or forecasts. No reliance should be placed on any such statements or forecasts when making any investment decision. The estimates, including expected returns and downside risk, throughout are calculated monthly by Frontier and will change from month to month depending upon factors, including market movements, over which Frontier has no control. They are only one factor among many considered in Frontier’s investment process and are provided solely to offer insight into Frontier’s current views on long-term future asset class returns. They are not intended as guarantees of future returns and should not be relied upon in making investment decisions. Frontier’s uses of external sources in no way be considered an endorsement. Reader accesses sources at their own risk. Frontier is not responsible for any adverse outcomes from sources provided and cannot guarantee their safety. Frontier does not have a position on the contents of site sources. Frontier does not have an affiliation with any author, company or security noted within. Frontier reserves the right to remove these links at any time without notice.

Frontier Asset Management is a registered investment adviser with the U.S. Securities and Exchange Commission; however, such registration does not imply a certain level of skill or training and no inference to the contrary should be made. Additional information about Frontier and its investment adviser representatives is available on the SEC’s website at www.adviserinfo.sec.gov.

© Morningstar 2022. All rights reserved. Use of this content requires expert knowledge. It is to be used by specialist institutions only. The information contained herein: (1) is proprietary to Morningstar and/or its content providers; (2) may not be copied, adapted or distributed; and (3) is not warranted to be accurate, complete or timely. Neither Morningstar nor its content providers are responsible for any damages or losses arising from any use of this information, except where such damages or losses cannot be limited or excluded by law in your jurisdiction. Past financial performance is no guarantee of future results.