U.S economy and markets firing on all cylinders

With the end of 2021 in sight, while the global economic recovery seems to be sputtering in spots overseas, it continues to impress here in the United States, where fourth quarter Gross Domestic Product (GDP) growth is expected to exceed 7%[1]. The truckloads of stimulus money distributed over the past two years have provided a steady source of fuel for consumer spending through various mechanisms. Notably, according to the Bank of England, and as reported by the Wall Street Journal, “The U.S. accounts for almost nine-tenths of the roughly 22-percentage-point surge in demand for durable goods among major advanced economies since the end of 2019.” Further, according to the U.S. Bureau of Labor Statistics, initial jobless claims recently hit a low not seen since 1969 and the number of job openings has eclipsed 11 million, which equates to about 1.5 job openings for each unemployed individual. Throw in supply chain bottlenecks, and the 39-year high inflation print of 6.9% is easy to comprehend. 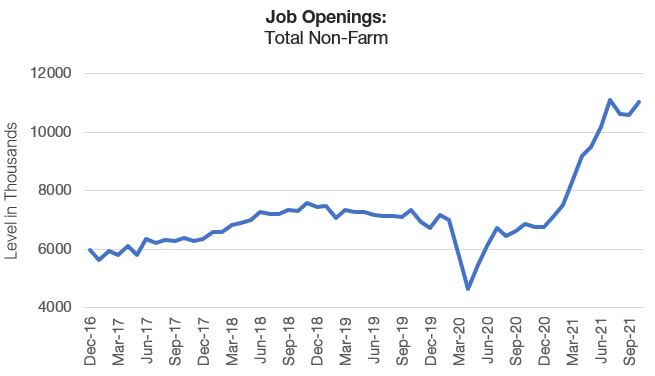 Of course, with the demise of the Build Back Better Bill this past weekend, at least in its current form, the likelihood of additional stimulus is lessened, which could hinder growth next year. On the upside, the anticipated increases in corporate taxes and the taxation of buybacks are off the table for the time being. And investors seemingly haven’t been deterred in the least by political battles, Omicron, inflation, or anything else for that matter. According to BofA, and as reported by The Daily Shot, inflows to equity mutual funds and ETFs over the trailing twelve months exceeded the total net flows over the past 19 years. 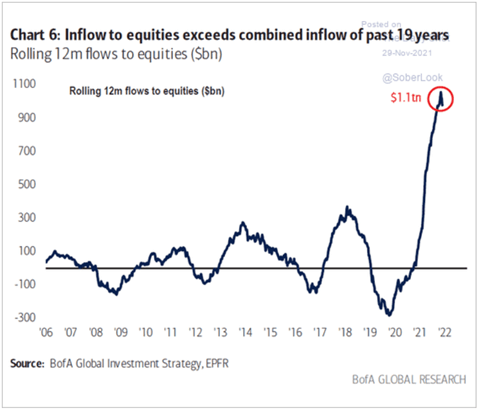 The lion’s share of flows has gone to the U.S., and subsequently, the U.S. stock market, as measured by the S&P 500®, is yet again leaving the competition in the dust. Through December 22, 2021, it is up almost 26% year-to-date, far ahead of international developed stocks (+8.2%) and emerging markets (-4.9%), the latter being heavily impacted by China (MSCI China NR -23.2%). It’s worth noting that various measures of market breadth, such as the percentage of stocks trading above their 200-day moving average or the number hitting new 52-week highs versus new lows, have been weakening. Further, according to Goldman Sachs, 35% of the S&P 500’s year-to-date return through December 9th has come from just five stocks: Microsoft, Google, Apple, Nvidia and Tesla. For stock pickers, that is a difficult environment in which to outperform.

Based on earnings estimates for next year, sell side analysts continue to be quite bullish on the pace of the recovery and what that means for profit growth. According to S&P, 2022 earnings are currently anticipated to grow at between 9.4% and 9.8% (Operating vs. As Reported). With GDP estimates coming in at less than half of those numbers, that kind of growth would seem to be a stretch given that margins are already near their all-time high. Fingers crossed.

As for the bond market, there hasn’t been much to celebrate this year. The list of fixed income sectors in the red is long: emerging market debt, non-U.S. treasuries, U.S. Treasuries, mortgage-backeds, asset-backeds and investment grade corporates. The few bright spots have been TIPs (+5.1%), high yield corporates (+4.7%), and leveraged loans (+3.3%). Munis have also held onto gains of about 1.5% thanks to a shortage of new issuance.

2021 has indeed been an interesting year for capital markets. With a major shift in central bank positioning going into 2022 it’s likely that next year will come with a whole new set of surprises. Stay diversified, don’t chase returns, and don’t forget to manage risk. Happy holidays to all.

EP 15: This is not your grandfather’s growth vs. value debate. (Guest: Brad Neuman, CFA, Director of Market Strategy, Alger)