Meet the new boss - same as the old boss

If the market was indeed concerned about the potential for a disruption at the Fed during a time of high inflation and the beginning of the end of quantitative easing (QE) – however temporary, given the codependent nature of the relationship – it can breathe a sigh of relief. This week President Biden nominated Chairman Powell for a second term, going against the wishes of progressives and opting for policy continuity. Ranking members of the Senate Banking Committee, as well as Treasury Secretary Janet Yellen supported the nomination of Powell, who was originally appointed by President Trump.

Elsewhere, investors have been digesting the news that five countries – China, India, Japan, South Korea, the U.K. and the U.S. – would be conducting a coordinated release of oil from their strategic reserves to help combat the rise in gas prices. The U.S. committed to releasing 50 million barrels, and the estimate is for the other five countries to release another 15 to 20 million barrels in total. It’s questionable whether the actions will make much of a dent however, as the market was expecting a larger number, and OPEC (Organization of the Petroleum Exporting Countries) could simply offset the release in the coming weeks by slowing production. West Texas crude oil prices have roughly doubled over the past year. 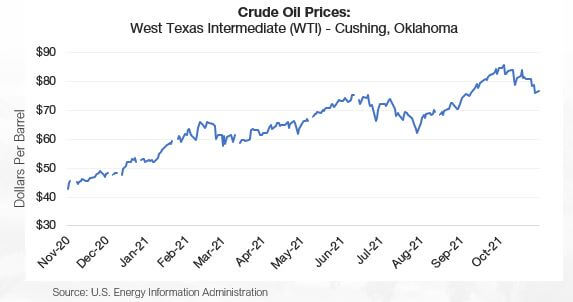 A recent research note from The Blackstone Group shows what consumers have been feeling every day— that inflation is everywhere. 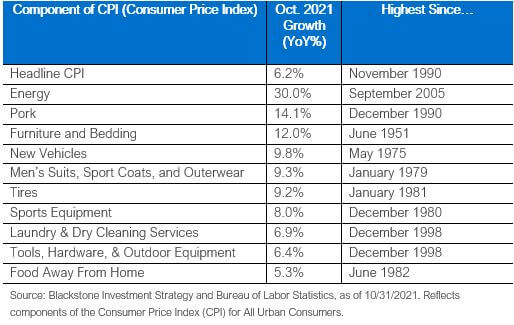 And with that, according to Bloomberg and reported by The Daily Shot, the probability of three rate hikes in 2022 is almost assured. 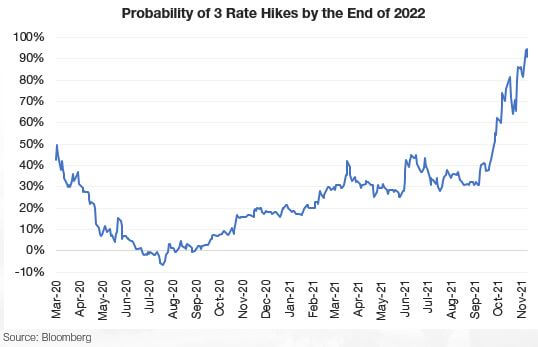 With the end of the month in sight, U.S. small cap stocks have been the dominant asset class, with the S&P 600 advancing by 4.2% through the close on the 23rd. Interestingly, while value stocks have far outpaced their growth peers within the small cap universe, the opposite has been true among large cap stocks. And small has not been rewarded overseas, where the MSCI EAFE Small Cap Index is down 2.3%, no doubt affected by the rise in the U.S. dollar. For comparison, the MSCI EAFE Index is up 1.3% on a fully hedged basis month-to-date, while its down 0.9% in dollar terms.

In fixed income land, it’s not been a kind month. With the yield on the 10-year rising from 1.55% to 1.67%, and yields on 3- and 5-year Treasuries advancing by even larger amounts, red ink is prevalent. The Bloomberg U.S. Aggregate Bond Index is off by 0.9%, and there has been almost nowhere to hide, with high yield (-0.5%), mortgage-backeds (-0.6%), investment grade corporates (-1.4%), and long-term Treasuries (-2%) all suffering declines. The bright spot has been munis, as the Bloomberg Municipal Bond Index has defied the market forces impacting taxable bonds and is up 0.6%.

And lastly, as you gather with friends and family in the coming days, here’s one more item to add to the list of things to be thankful for – on Wednesday morning, NASA launched a space probe designed to deflect asteroids that threaten the earth in a test of technology that might save the planet at some point…so we’ve got that going for us. Happy Thanksgiving!

When the Bear Attacks