Inflation showing no signs of slowing

The just released report from the U.S. Bureau of Labor Statistics revealed that year-over-year inflation remains relatively high, with the Consumer Price Index (CPI) for all urban consumers coming in at 5.4% (the monthly change was 0.4%). With lingering supply chain problems, spiking energy prices ahead of the colder winter months, and an ongoing labor shortage, it seems increasingly likely that above target inflation is here to stay for the time being. Most discouraging is the fact that the components of inflation considered to be related to re-opening have fallen, meaning that inflationary pressures are now related to core components. And with this year’s persistent inflation, next year’s cost-of-living adjustment for Social Security recipients is now projected to be a roughly 6% boost, the largest such adjustment since 1982 [1]. 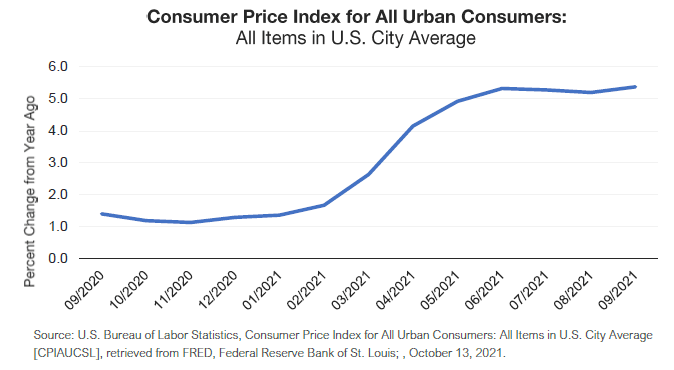 On the jobs front, last week’s numbers from the U.S. Bureau of Labor Statistics were disappointing, as the U.S. economy only added 194,000 jobs versus expectations for around a half million. The thinking going into the release was that a combination of reduced unemployment benefits, coupled with the start of the school year that should have helped solve the childcare problem, would bring back a substantial number of workers, but that hasn’t been the case, at least not yet. While the unemployment rate did drop to 4.8%, the participation rate ticked downward as well and remains stubbornly below pre-COVID-19 levels. On top of that, about 4.3 million people (2.9% of the workforce) quit their jobs in August. Employers will likely continue to struggle to attract and retain talent in the current environment. 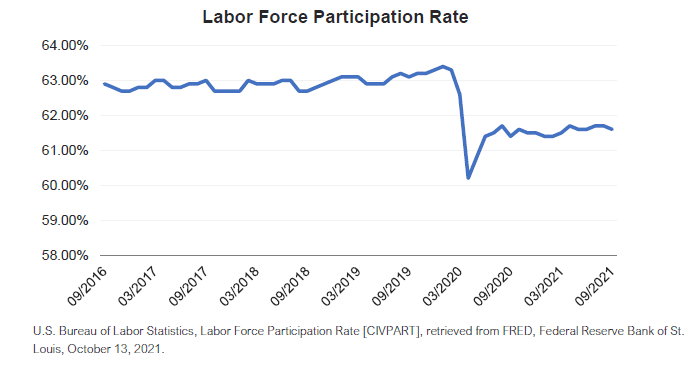 With the end of the third quarter comes earnings season, which kicks off this week. Expectations are for earnings to fall from the second quarter, but to be well above last year’s levels. In fact, according to S&P, third quarter operating earnings for the S&P 500® should be around $48 a share, down from $52 in the second quarter, but about 27% higher than 3Q20 earnings of approximately $38. Margins, which hit a high of 13.5% in the second quarter are expected to fall to about 12.6%, as increases in wages, commodities, freight, semiconductors and other electronics all start to put the squeeze on. 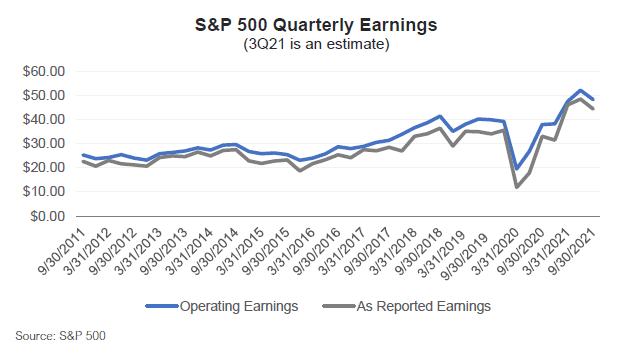 With about two weeks of the fourth quarter in the books, REITs and commodities have added to their third quarter gains, with the FTSE NAREIT Equity REIT Index up 3.2% through October 12th, and the Bloomberg Commodity Index ahead by about 2%. Small caps, especially small value names, have also done comparatively well; the Russell 2000 Value Index is up 2.3% for the month. Bonds have struggled as rates have risen, and the Bloomberg U.S. Aggregate Bond Index is down 0.3%. Rising rates and a rising dollar seem to have also hurt returns to international stocks, particularly growth stocks. The MSCI EAFE Growth Index is off by 1.7% month-to-date.

According to survey data from Deutsche Bank Research, an increasing number of market professionals are expecting a 5-10% decline before year end. It’s the first time since July 2020 that the reading has been bearish. Investors certainly have a lot on their minds, and it’s difficult to see what the near-term catalyst would be to push stocks higher, but then again, it always is.

The Charts of the Week: OMG! A recession is coming