Soundtrack for this issue: “Nobody to Blame (But Me)” by Chris Stapleton

Neuroeconomics is a combination of neuroscience, economics, and psychology that seeks to explain the connection between investor behavior and the brain’s workings. Some behavioral biases may be explained through the study of serotonin and dopamine. Some researchers believe that low levels of serotonin are a link to anxiety, depression, and impulsiveness. Serotonin can be low for many reasons, but one is the failure of events to meet expectations. Therefore, theories exist that serotonin levels may play into prospect theory. What is prospect theory, and how does it affect me?

Prospect theory is the idea that investors tend to fear losses and, depending on the situation, will act differently to avoid them1. If an investor is sitting on a gain, they tend to be loss averse. This means that they become more conservative in thought and do not want to lose any money. On the other hand, if an investor is sitting on a loss, they tend to become risk-seeking. This means they are willing to assume a riskier position to avoid losses or, better yet, make up for the current loss. If failure to meet expectations causes lower serotonin and lower serotonin can lead to impulsiveness, this may explain why individuals become risk-seeking when experiencing a loss. To better understand this all, let us look at two different scenarios.

Although Prospect Theory can be considered a fallacy of the human brain, I believe it is partially an intuitive bias we have to protect ourselves. I say that because as an investment decreases in value, the gain needed to get it back to even increases exponentially. For example, if an investment drops 20%, it does not need to go up 20% to get back to even. Instead, it must increase by 25% to get back to even. This graph below is a great visual of how this relationship works. 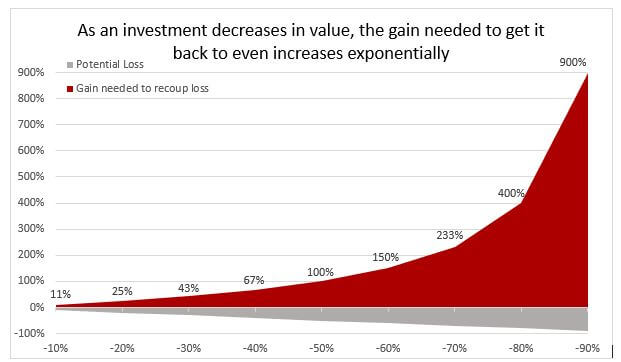 The purpose of this graph is not to make us fearful of losses, because we know that when investing, we will experience losses. Instead, let the graph teach us something. We should view risk or potential for loss consistently over time. If we are sitting on a gain, we do not want to be so paralyzed by fear of loss that we become too conservative and miss future potential gains. If we are currently at a loss, we do not want to gamble to make up for that loss. If we keep losing, it will take more to recoup those losses. This relates to the sports phrase of assuming it is 0-0 at halftime – whether we are at a loss or gain, we should make the best decision for the future. Let us assume we are neither at a gain or loss when we go to make a decision.

At Frontier, we understand that people can and will fall susceptible to Prospect Theory. This is why we rely on our process built on fundamentals and attempt to remove emotion from the decision-making process. We want to try and remove as many biases as possible while understanding how people think and feel. We have a Downside First Focus when it comes to the investment process. In essence, Downside First Focus seeks to keep the risk level constant throughout time. We want to rely on the fundamentals and not become loss averse when sitting on gains or risk-seeking when sitting on losses. We want to make sure we let fundamentals and processes lead us and not emotion or speculation. If you ever have any questions about how our process works, please let me know so we can have a conversation to go over the details.

Next time you make an investment decision, take a second to see if you are falling susceptible to Prospect Theory. I know I have! If neuroeconomic researchers are right, I think we can blame serotonin. Maybe the answer is to go for a run to boost that serotonin level to avoid being impulsive in our decision making. However, in the meantime, Frontier has built a process to combat biases like this one.

Past performance is no guarantee of future returns. Nothing presented herein is or is intended to constitute investment advice or recommendations to buy or sell any types of securities and no investment decision should be made based solely on information provided herein. There is a risk of loss from an investment in securities, including the risk of loss of principal. Different types of investments involve varying degrees of risk, and there can be no assurance that any specific investment will be profitable or suitable for an s investor’s financial situation or risk tolerance. Diversification and asset allocation do not ensure a profit or protect against a loss. All performance results should be considered in light of the market and economic conditions that prevailed at the time those results were generated. Before investing, consider investment objectives, risks, fees and expenses. All calculations are by Frontier.

Information provided herein reflects Elevate’s views as of the date of this newsletter and can change at any time without notice. Elevate obtained some of the information provided herein from third party sources believed to be reliable, but it is not guaranteed, and Frontier does not warrant or guarantee the accuracy or completeness of such information. The use of such sources does not constitute an endorsement.

Exclusive reliance on the information herein is not advised. This information is not intended as a recommendation to invest in any particular asset class or strategy or as a promise of future performance. References to future returns are not promises or even estimates of actual returns a client portfolio may achieve. Assumptions, opinions and estimates are provided for illustrative purposes only. They should not be relied upon as recommendations to buy or sell any securities, commodities, treasuries or financial instruments of any kind. This material has been prepared for information purposes only and is not intended to provide, and should not be relied on for, accounting, legal, investment or tax advice. Please consult an accounting professional for tax advice.

Six questions to help advisors prepare for the 1099 season