During the 2020 presidential election, Joe Biden campaigned on raising taxes on corporations and higher income earners. Once in office, his administration worked with Congress to try and pass healthcare and climate legislation that would be funded by increasing taxes. However, observers were once again reminded how proposing and actually passing tax legislation are two very different things. The fact that tax changes have yet to be passed has not been for a lack of trying. The administration, House and Senate have all put differing plans forward on ways to increase revenue under the Build Back Better Act and American Families Plan proposals.

Heading into this fall, tax changes appeared to be all but dead until Wednesday afternoon when news broke that one of the Democratic senate holdouts (Senator Joe Manchin, West Virginia) had agreed in principle to possible tax changes tied to healthcare, climate change and deficit reduction. As of now, the news appears to have taken many senators by surprise –including Senator Kristen Sinema of Arizona—another Democratic Senator whose vote was not always a given on prior tax increase proposals. Senator Manchin’s support does not mean the bill will move forward as they will need forty-nine more votes across the Senate.

Recall that back in 2021 many items were put forward as possible revenue raisers in the form of tax changes:

And this is only a partial list!  The ideas and changes were coming from all directions.

Where does that put us today? Inflation Reduction Act of 2022

On Wednesday, July 27, 2022, the current policy ambitions announced appear to be scaled back from last year’s proposals and accordingly, so has the required revenue and supporting related tax changes.  Looking only at the tax changes and not the policy provisions, the tax changes being considered as part of the recently published “Inflation Reduction Act of 2022” include:

Per the proposed legislation, “There are no new taxes on families making $400,000 or less and no new taxes on small businesses – we are closing tax loopholes and enforcing the tax code.”  Time will tell how accurate the White House will be on this statement.

How could a bill pass and what is the possible timing?

To pass permanent tax code changes, the bill would need three-fifths support in the Senate (60 votes) and a simple majority in the House of Representatives. The U.S. Senate is currently split 50/50 between Democrats and Republicans with a tie-breaking vote belonging to Vice-President Kamala Harris. But 50/50 is less than three-fifths – how could it pass?

Budget reconciliation is a special legislative path that allows for passage with a simple majority requiring the bill to fit within certain budget constraints and other parliamentary hurdles. We have yet to hear if the required majority of Democrat House of Representatives are on board. The majority in the House is very narrow as well.  During previous tax change debates, there were several Democratic House members who said they would not support any tax changes unless it included the elimination of the SALT (State and Local Tax) deduction. It can get ugly quickly.

With the midterm elections coming up in November of this year, the narrow majorities could easily flip in the House and/or the Senate. The upcoming midterms create somewhat of an urgency to try and pass any tax changes and related policy goals while the Democrats hold narrow majorities.

What is the potential impact to investors?

Based on what we know very early in the discussion, there does not appear to be changes to investment tax rates for most taxpayers unless they recognize any income as carried interest. For those who do have carried interest income, this will be a material change. But as noted, this has been proposed before only to have interested parties work to have it removed in final tax bills. It will be interesting to watch for sure.

Recall, while the Tax Cut and Jobs Act (TCJA) lowered income tax rates for many, it did not lower tax rates for LTCG and Qualified Dividends. The TCJA was also passed via Budget Reconciliation and the drafters had to fit the bill within a certain budget expense window. Leaving these tax rates unchanged helped support the needed revenue. And these are the tax rates where financial advisors can have the biggest impact. 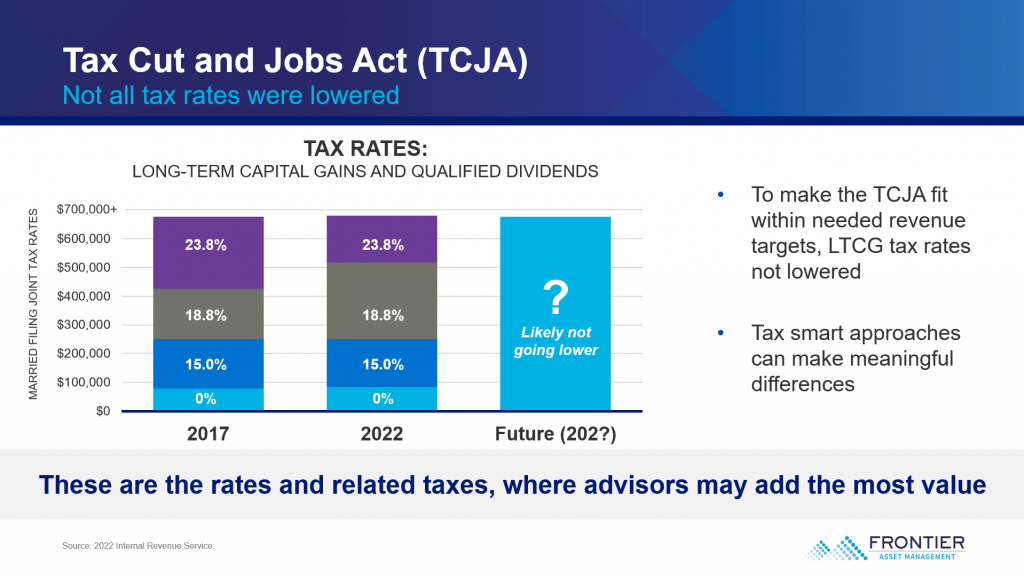 The current administration has been trying to pass climate and healthcare legislation since coming into office. This legislation has required finding different avenues/sources of tax revenue to fund the policy goals. The recent Inflation Reduction Act of 2022 appears to propose somewhat reduced policy ambitions and reduced needs for revenue (but not $0). It does not mean that taxes might not go up, but the number of impacted taxpayers appears to be less than proposed last year. And, as we have seen in the last 18 months, it is quite possible the proposal loses political will and falls by the wayside.

Regardless, investment taxes will continue to be material headwinds for taxable investors and tax-smart advisors can make meaningful differences for their clients.

When it comes to increasing taxes, it is always easier when the tax is paid by someone else. As the saying goes:

Tax that fellow behind the tree.

Exclusive reliance on the information herein is not advised. This material has been prepared for information purposes only and is not intended to provide, and should not be relied on for, accounting, legal, investment or tax advice. Past performance is not indicative of future results. Stated information is derived from proprietary and nonproprietary sources that have not been independently verified for accuracy or completeness. While Frontier Asset Management believes the information to be accurate and reliable, we do not claim or have responsibility for its completeness, accuracy, or reliability. The use of such sources does not constitute an endorsement. Frontier’s use of external articles should in no way be considered a validation. The views and opinions of these authors are theirs alone. Reader accesses the links or websites at their own risk. Frontier is not responsible for any adverse outcomes from references provided and cannot guarantee their safety. Frontier does not have an affiliation with any author, company or security noted within. Frontier reserves the right to remove these links at any time without notice. The views expressed represent the opinion of Frontier Asset Management. The views are subject to change and are not intended as a forecast or guarantee of future results.

Frontier does not provide tax advice. Please consult with a CPA for recommendations pertaining to individual circumstances.

Frontier Asset Management is a Registered Investment Adviser. The firm’s ADV Brochure and Form CRS are available at no charge by request at info@frontierasset.com or 307.673.5675 and are available on our website www.frontierasset.com. They include important disclosures and should be read carefully.