Perspective : The Charts of the Week: OMG! A recession is coming

This week’s edition of Charts of the Week is focused on a single word that is increasingly in the news and one that Americans have been googling more than at any time since 2004[1].

Should this come as a surprise? Not really. With persistent inflation – both in the form of high asset prices and high prices on goods and services – it was expected for the Fed to tighten its monetary policy through an increase to the Fed Funds rate. And when the Fed raises interest rates, history has shown that the economy naturally slows, earnings decline, and recessions can occur.   Recession is a word that strikes fear for many investors. While it’s easy to understand why, the “OMG a recession is coming” reaction is the opposite reaction an investor should be having.

1. While the probability of a recession is increasing, it’s not guaranteed.

According to the Wall Street Journal, economists have raised the likelihood of a recession to 44% in the next 12 months. Despite the doomsaying, a recession isn’t guaranteed. The probability debate is on between economists and the Fed. 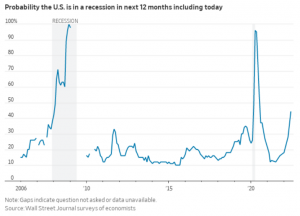 2. Even if a recession does happen, it’s not the end of the world. Recessions can be healthy for the overall economy and are part of the economic cycle.

A recession can be a sign that the economy is overheated – it needs to “cool down” to have a cyclical recovery. 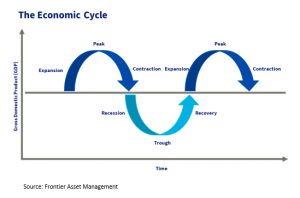 3. A sign of a recession could be viewed as a good time to buy stocks.

Investors who hunker down and panic while they wait for a recession to strike may be missing out on a buying opportunity. What investors often forget is capital markets lead the economy. Historically, as shown by the U.S. recessionary periods in the charts below, once the economic slowdown reaches recession levels (as measured by GDP), the stock market (as measured by the S&P 500® Index) has already bottomed and is rising. When viewing the relationship between the stock market and the economy in this light, a sign of a recession could almost be viewed as a good time to buy stocks.

Historically, the stock market has bottomed while the economy is still contracting. 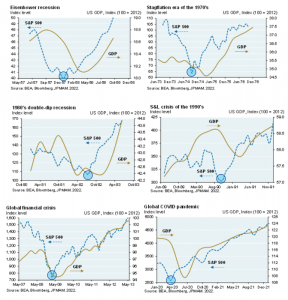 As of today (June 23, 2022), the S&P 500 is down just over 20% year-to-date and we aren’t in a recession yet. Yes, that 20% hurts in the short term, but the good news is that history has shown that markets recover. Emotions are probably the hardest thing to control right now but remember that you can benefit from the market swinging back and forth between euphoria and despair. Instead of panicking, maybe even look forward to the buying opportunity that has historically occurred during times like this.

The Charts of the Week: The Fed reacts