Perspective : The Charts of the Week: The Fed reacts

This week’s edition of “The Charts of the Week” is focused on the Fed’s (Federal Reserve) recent 0.75% interest rate increase as part of their efforts to get in front of high inflation.

This rapid increase in the Fed Funds rate (which is the largest single-meeting increase since 1994) represents one of their main levers to try to temper inflation. These increases – and expectations of more this year – are causing headaches for investors as reflected in year-to-date volatility in stock and bond markets.

The headline statistic that has grabbed the media (and therefore, investors’) attention: the 8.6% year-over-year increase in the Consumer Price Index (CPI) Index for May 2022 reported by the Bureau of Labor Statistics last Friday. 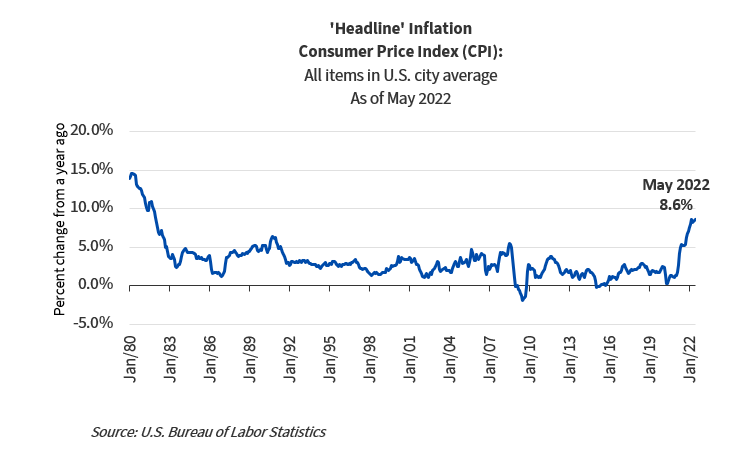 2. Core inflation: for those who don’t drive or eat

The 8.6% CPI number mentioned above is known as ‘headline’ inflation, but it’s not the primary number that most economists and the Fed use when measuring and thinking about inflation. Instead, they will also consider ‘Core’ inflation which removes the impact of direct energy and food prices. Why? These areas are historically quite volatile and can mask overall underlying inflation trends. Recall the price of oil in 2008 when it peaked at $140 a barrel in June of 2007, only to fall to $42 a barrel seven months later. ‘Core’ inflation is lower at 6% – a number which is high, but materially lower than the headline number of nearly 9%. 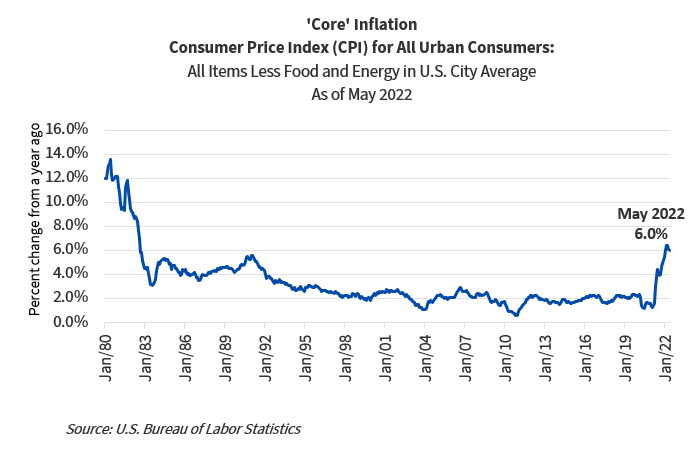 The Federal Reserve has the dual mandate of both maintaining price stability (low inflation) and full employment. And yet, while the media headlines bring up the high inflation numbers, the historically low unemployment number often gets less airtime. As mentioned in last week’s “The Charts of the Week”, consumer spending has remained strong, but the most recent reading showed a seasonally adjusted pullback of 0.3% in May[i]. There is lots of pressure on the consumer as their spending accounts for almost 70% of all U.S economic activity.

The U.S. unemployment rate is at a 50-year low. Over the past year, on average more than 400,000 jobs have been added each month, making this the strongest period of employment growth going back to 1939, according to the Wall Street Journal. And as shown in the chart below, the unemployment rate remained at 3.6%, which is just above a half-century low. Of course, the situation can change quickly, but the consumer and low unemployment are all strong offsets to a possible slowing economy. 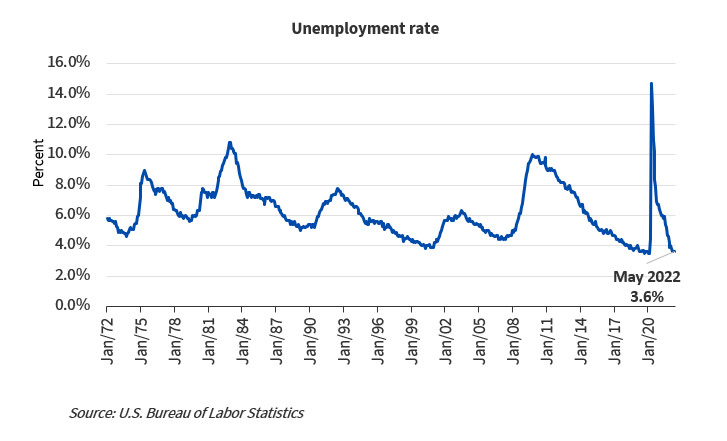 The Fed’s dilemma:  Lowering inflation and not adversely impacting the employed

As the Fed debates the speed and magnitude of interest increases to catch up with inflation, they are looking to balance the impacts of slowing the economy will have on unemployment. If they believe that inflation may have peaked or is near peaking, they do not want to impact unemployment more than needed.

So, the question is: Would investors rather have record high inflation or record high unemployment? Of course, the answer is NEITHER, but these are the trade-offs facing the Fed.

With the recent rate increase and inflation reports, the Fed is looking to establish (or re-establish) its credibility through larger-than-expected interest rate hikes as witnessed this week. Time will tell if they strike the right balance. But one thing we know is that markets have historically found a way to digest the news and move forward.

The Consumer Price Index For All Urban Consumers (CPI-U) measures the changes in the price of a basket of goods and services purchased by urban consumers. The urban consumer population is deemed by many as a better representative measure of the general public because most of the U.S. population—approximately 89% according to the U.S. Bureau of Labor Statistics—lives in highly populated areas.

Inflation is the decline of purchasing power of a given currency over time. A quantitative estimate of the rate at which the decline in purchasing power occurs can be reflected in the increase of an average price level of a basket of selected goods and services in an economy over some period of time. The rise in the general level of prices, often expressed as a percentage, means that a unit of currency effectively buys less than it did in prior periods.

The views expressed represent the opinion of Frontier Asset Management. The views are subject to change and are not intended as a forecast or guarantee of future results. This material is for informational purposes only. It does not constitute investment advice and is not intended as an endorsement of any specific investment. Stated information is derived from proprietary and nonproprietary sources that have not been independently verified for accuracy or completeness. While Frontier Asset Management believes the information to be accurate and reliable, we do not claim or have responsibility for its completeness, accuracy, or reliability. The use of such sources does not constitute an endorsement. Frontier does not have an affiliation with any author, company or security noted within. Statements of future expectations, estimates, projections, and other forward-looking statements are based on available information and the Frontier Asset Management’s view as of the time of these statements. Accordingly, such statements are inherently speculative as they are based on assumptions that may involve known and unknown risks and uncertainties. Actual results, performance or events may differ materially from those expressed or implied in such statements. Investing in securities involves risks, including the potential loss of principal. Past performance is not indicative of future results.

Is a TAMP Right for Me?

EP6: Is this the new normal, or will we return to the old normal one day? (Guest: Robert Almeida, MFS Funds)