“While investors appear euphoric about the strong economy and ever rising asset prices, the headwinds of inflation and tighter Fed policy may stall prospects for both stock and bond prices in 2022.”
– Geremy van Arkel, CFA

Inflation – Will it be a problem?

While the Fed governors appear to be sitting on Zoom bemoaning whether to accentuate the word “persistent” over “transitory”, out here in the real world, we are all feeling the effects of inflation. This long dormant economic dragon has awoken and is lumbering out of its cave. And, historically, when you wake the dragon, she doesn’t go back to sleep too quickly.

Debate amongst yourselves if you care to. Is inflation occurring due to a decade of unprecedented globally coordinated stimulus, repression of interest rates, COVID-19, worker shortages, supply chain congestion, demographics, or a wage price spiral?  Wait, isn’t all of this happening at once?

I have written and presented extensively about inflation over the past year, but here and now, I want to emphasize one point. Historically, rapidly rising inflation has set into motion a chain reaction of events that have often led to recessions.

What can the Fed do now?

With the Fed Funds Rate pinned at 0% and inflation near 6% (12-month trailing Consumer Price Index for All Urban Consumers (CPI-U)), it would appear likely that the Fed will raise interest rates and taper/end asset purchases in 2022.

It is not unprecedented for central banks to appear paralyzed in the face of inflation. Central bankers should know that tight and restrictive monetary policy can lead to asset price disruptions and recessions. To raise interest rates and end asset purchases is a headwind for asset prices and ultimately the economy, but to let inflation spiral out of control is a far more dangerous proposition.

We believe the Fed is behind the curve on reaching to inflation.

Warren Buffett once said, “Never bet against America.” Over the past decade, the S&P 500 Index has performed true to these words. The S&P 500 has returned about 17% a year over the past 10 years, more than doubling the return of most indexes representing other major asset classes. And rightfully so—the S&P 500 is a quality index that has experienced solid earnings growth, represents the largest economy in the world in terms of market capitalization, and is comprised of many of the most successful companies in the world—maybe ever. Has there ever been a Google or an Amazon before? 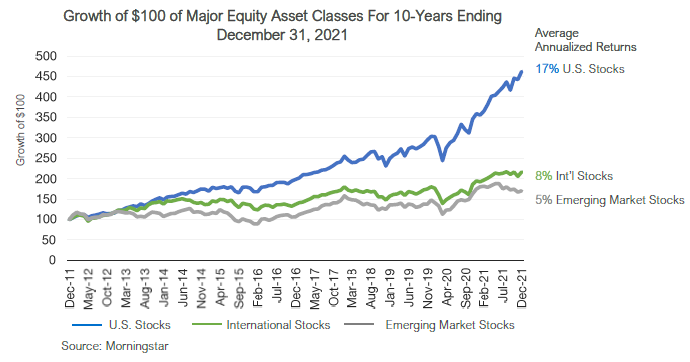 Lately though, when I reference the performance of the S&P 500 (or similar U.S. Large Cap stock indexes), I can’t help but think about those Los Angeles real estate reality T.V. shows that I shamelessly watch. To use an analogy of real estate as an example for stock prices, “Yes, I can see that the house is absolutely incredible but is $37 million dollars a reasonable price?” Will the buyer of that house – at that price – make any money in the future, and how much risk are they taking on?

When investing in just about any asset, this same simple valuation equation exists—there are the characteristics and quality of the asset, and then there is the price we all have to pay. By all measures, many of the companies that make up the S&P 500 are standouts on the global scale and in terms of history, but what price should you pay to ensure you continue to experience a solid return with reasonable risk?

The above Shiller P/E (Price to Earnings) chart characterizes the price of the S&P 500 in reference to the trailing 10-year normalized earnings through history. We can debate all the merits of S&P 500, but this depiction clearly shows that in a historic sense, U.S. large cap stocks are expensive.

Although just because U.S. large cap stocks have greatly outperformed other competing asset classes, and are priced at lofty historically high valuations, that does not imply that a stock market crash is imminent. After all, there are several tailwinds for U.S. equities, including:

Rarely do stock markets fall apart due to valuations alone, one would have to look back to The Tech Wreck in the early 2000’s for the last meaningful occurrence of that. More often, in the modern era, stock market risk events are unprecedented surprises (black swans). However, leadership can shift ever so subtlety, and often when investors least expect it.

What could break this trend?

In the early 2000s, when S&P 500 leadership wanned, there was severe damage to the technology stock sector, but there were also winners. In the years following The Tech Wreck, two new economic outcomes entered the landscape: inflation and rising interest rates.

Post “Tech Wreck” when inflation and interest rates were rising 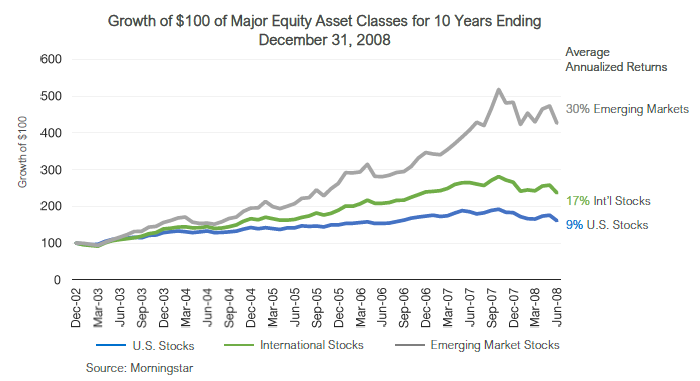 Not to say that history repeats, but it can rhyme.  Today, the breezy tailwinds of low inflation, low interest rates, and abundant stimulus have never appeared more vulnerable to a change. Not only have these tailwinds petered out, but they are now headwinds. But, what, me worry? The trend is your friend…until it is not.

Being a downside risk manager, we are fearful when we believe others are greedy. Thus, the three key points for the quarter could be perceived to be a rather dour outlook. However, please do not confuse tempering optimism with outright pessimism. Across the global landscape, expected returns differences between asset classes present positioning opportunities, and small adjustments to the asset allocation framework can result in significant added value at this time. Alternatively, though, simple large U.S. stock and aggregate bond index strategies could be in for quite a challenging time when the trend is no longer your friend.

Past performance is no guarantee of future returns. Performance discussed represents total returns that include income, realized and unrealized gains and losses, but gross of advisory fees. Nothing presented herein is or is intended to constitute investment advice or recommendations to buy or sell any types of securities and no investment decision should be made based solely on information provided herein. There is a risk of loss from an investment in securities, including the risk of loss of principal. Different types of investments involve varying degrees of risk, and there can be no assurance that any specific investment will be profitable or suitable for any investor’s financial situation or risk tolerance. Diversification and asset allocation do not ensure a profit or protect against a loss. All performance results should be considered in light of the market and economic conditions that prevailed at the time those results were generated. Before investing, consider investment objectives, risks, fees and expenses. Frontier may modify its process, opinions and assumptions at any time without notice as data is analyzed. All calculations of performance are by Frontier.

Frontier’s uses of external sources in no way be considered an endorsement. Reader accesses sources at their own risk. Frontier is not responsible for any adverse outcomes from sources provided and cannot guarantee their safety. Frontier does not have a position on the contents of site sources. Frontier does not have an affiliation with any author, company or security noted within. Frontier reserves the right to remove these links at any time without notice.

The Charts of the Week: The Fed reacts